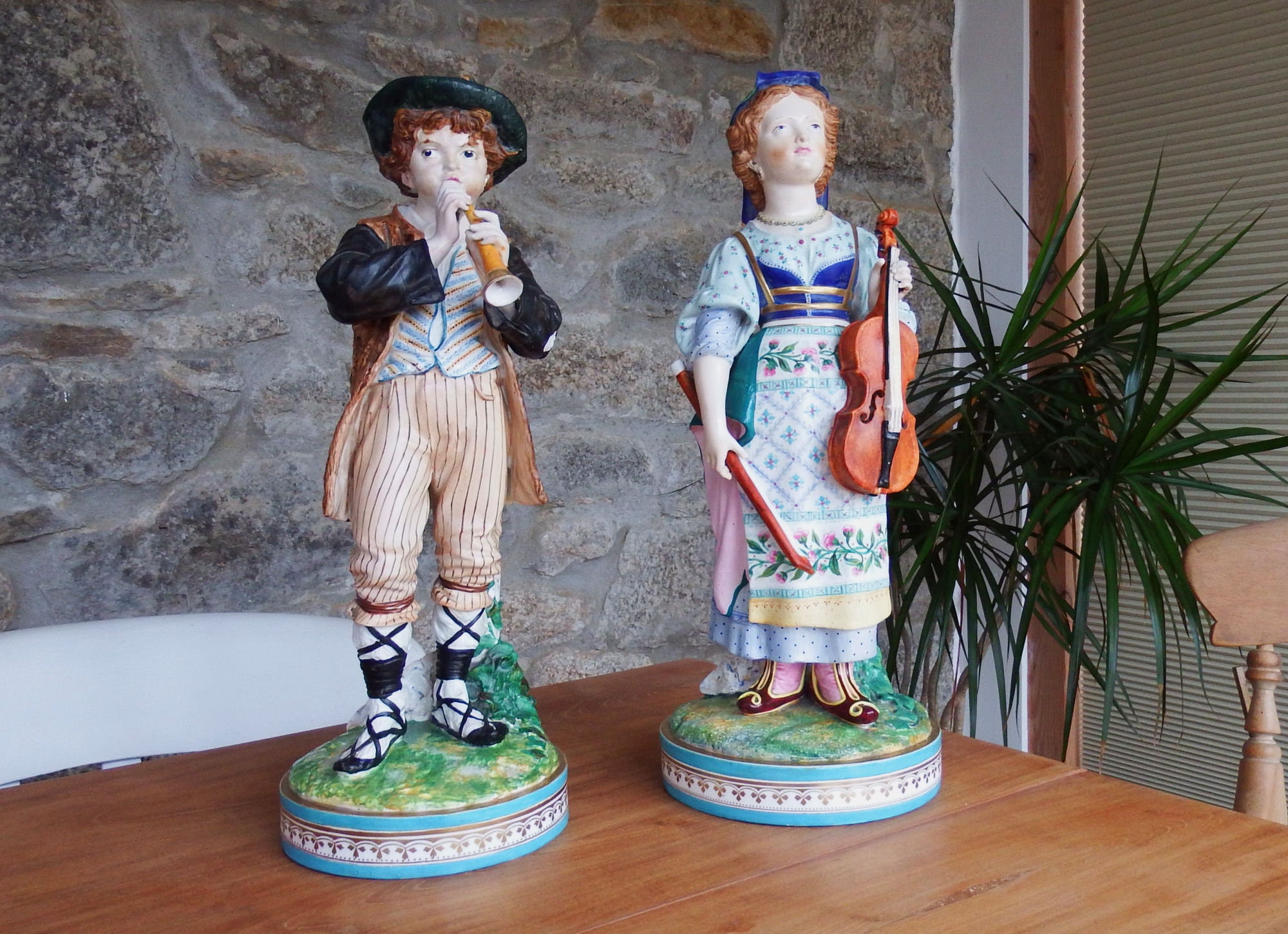 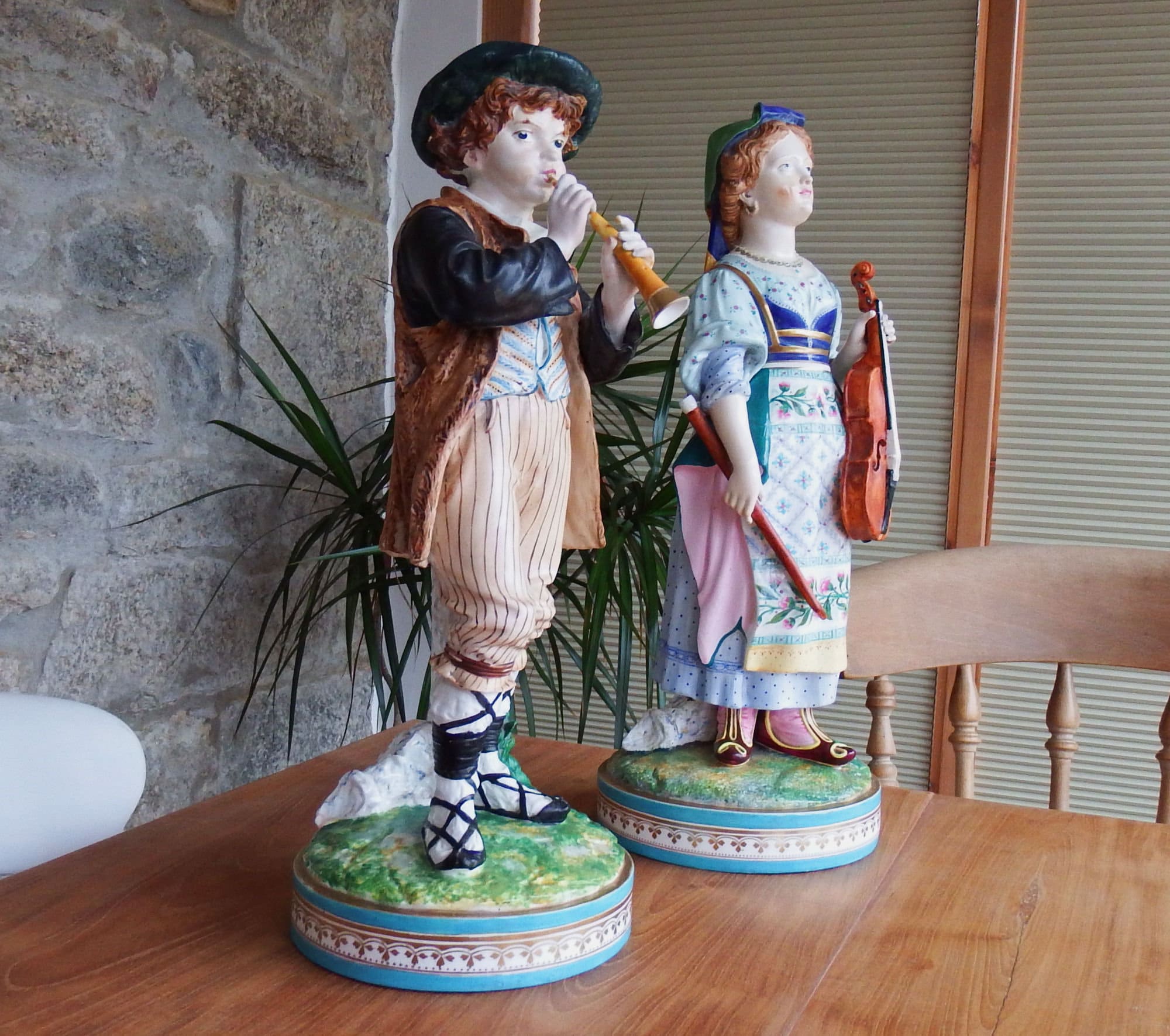 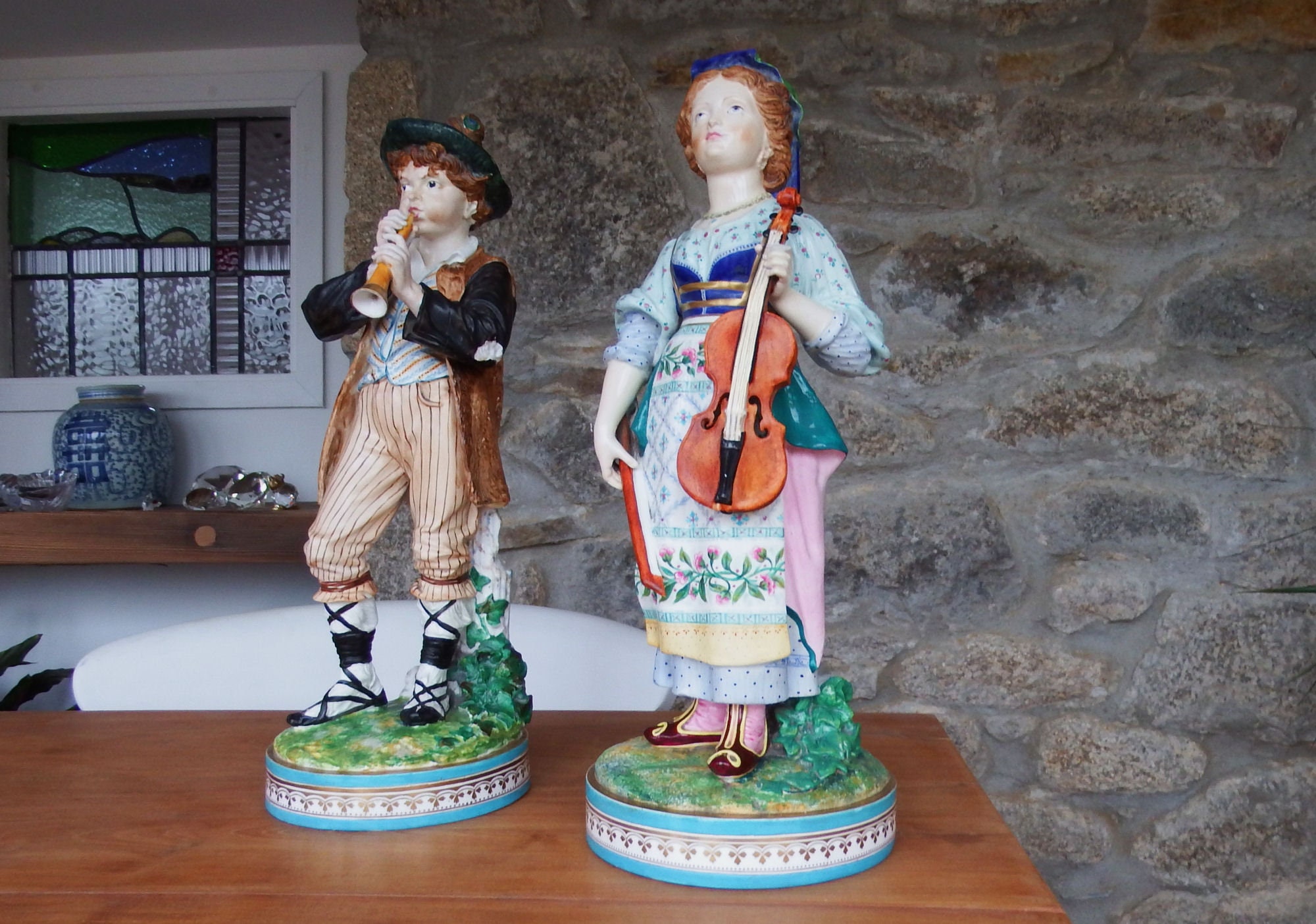 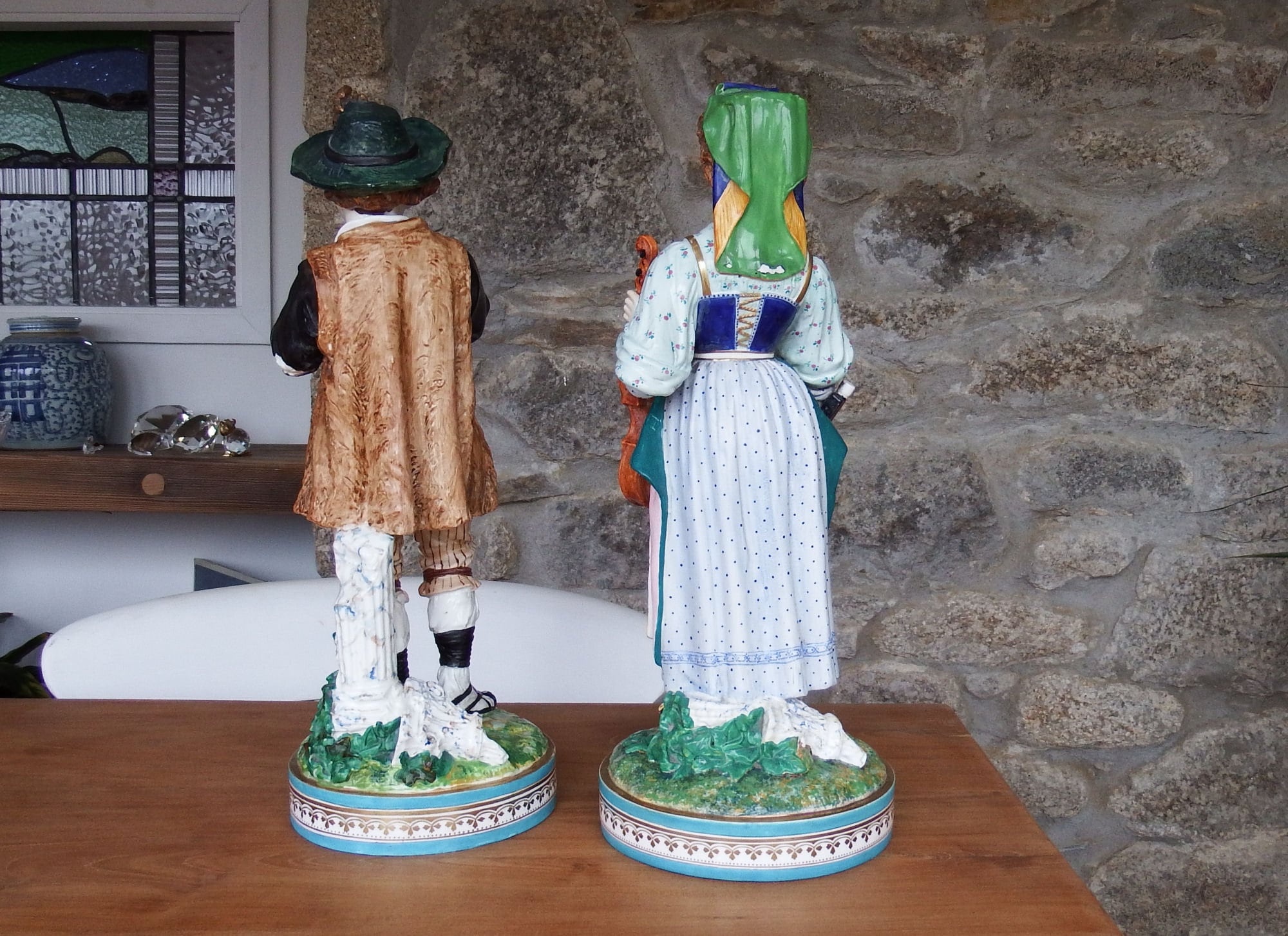 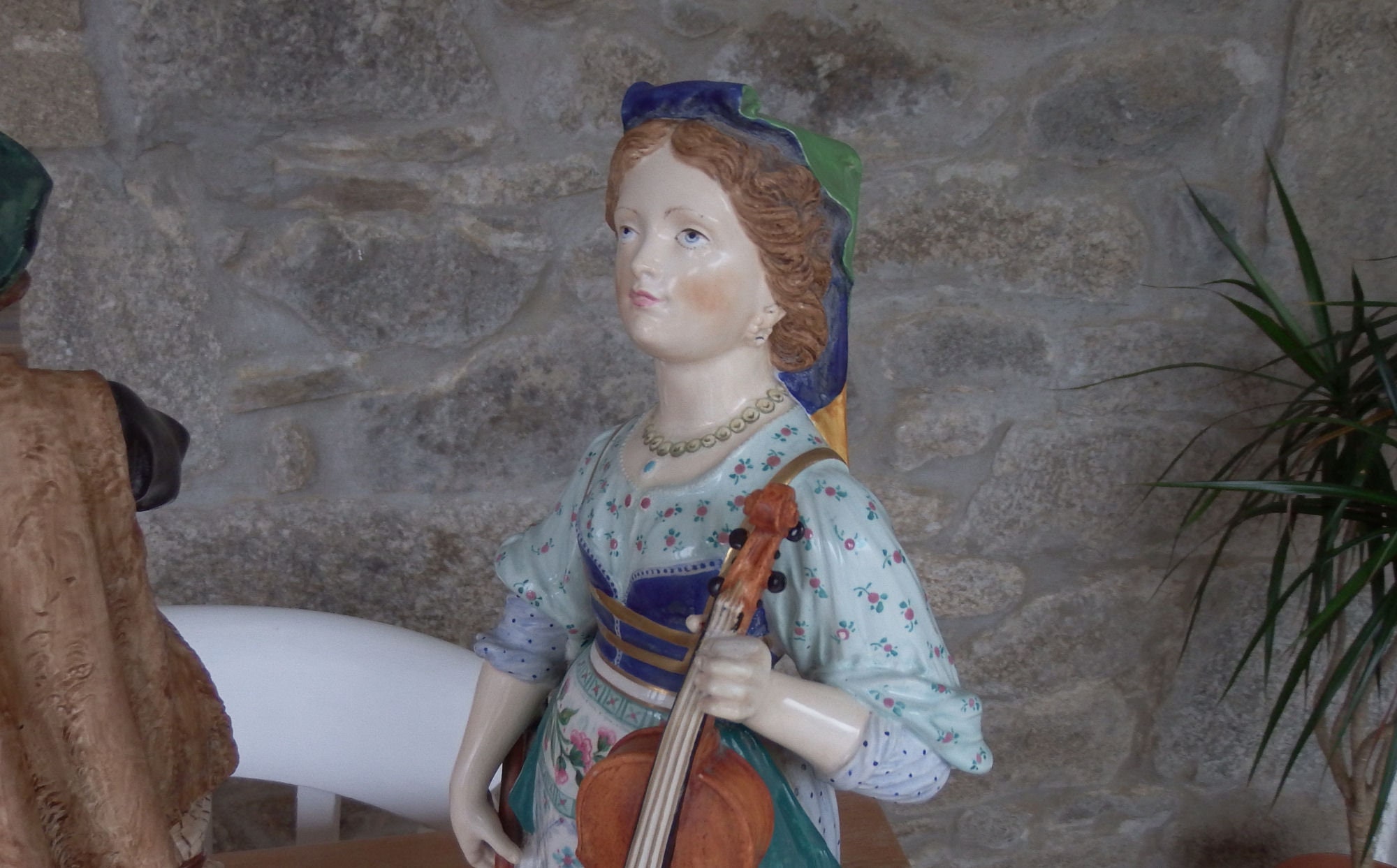 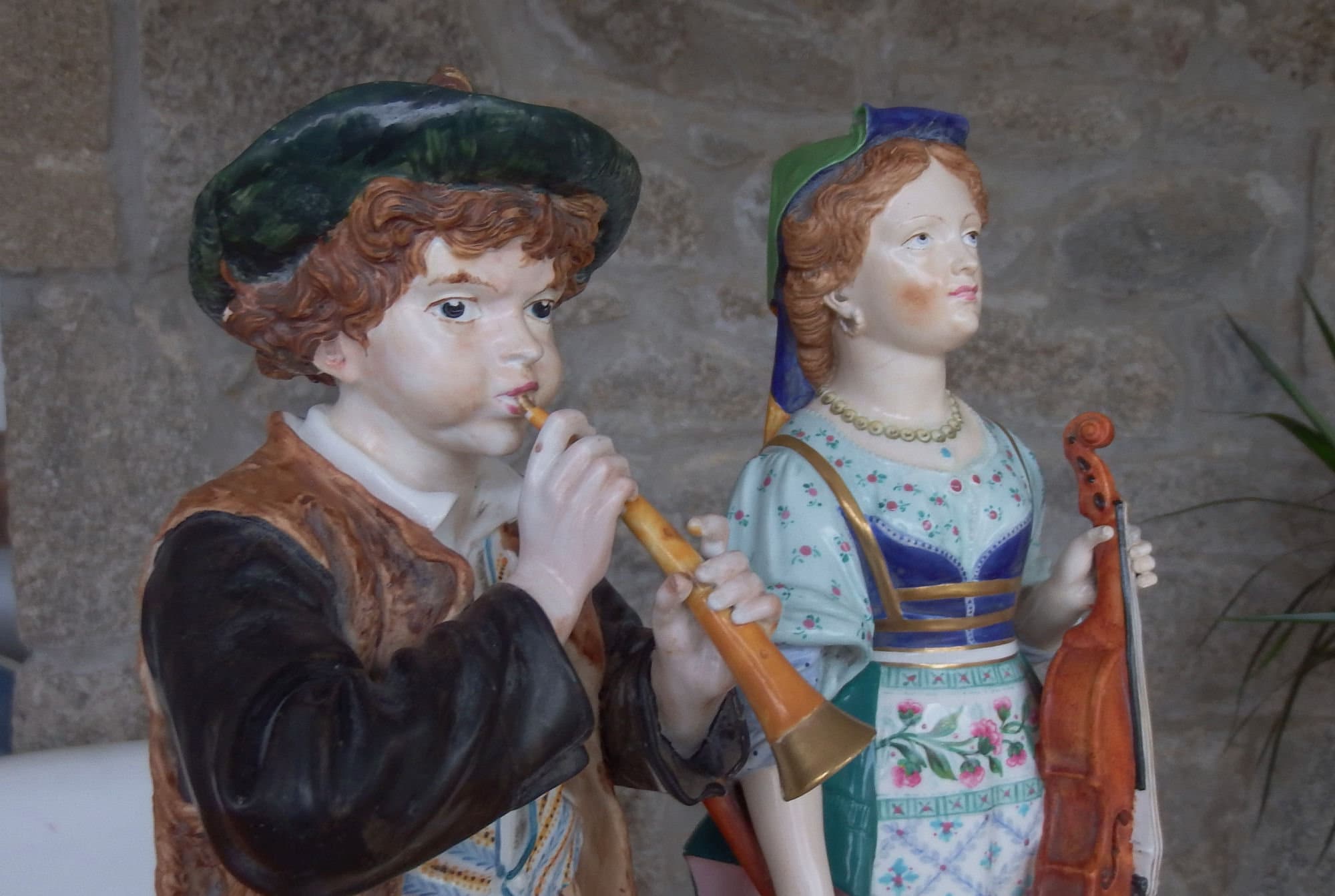 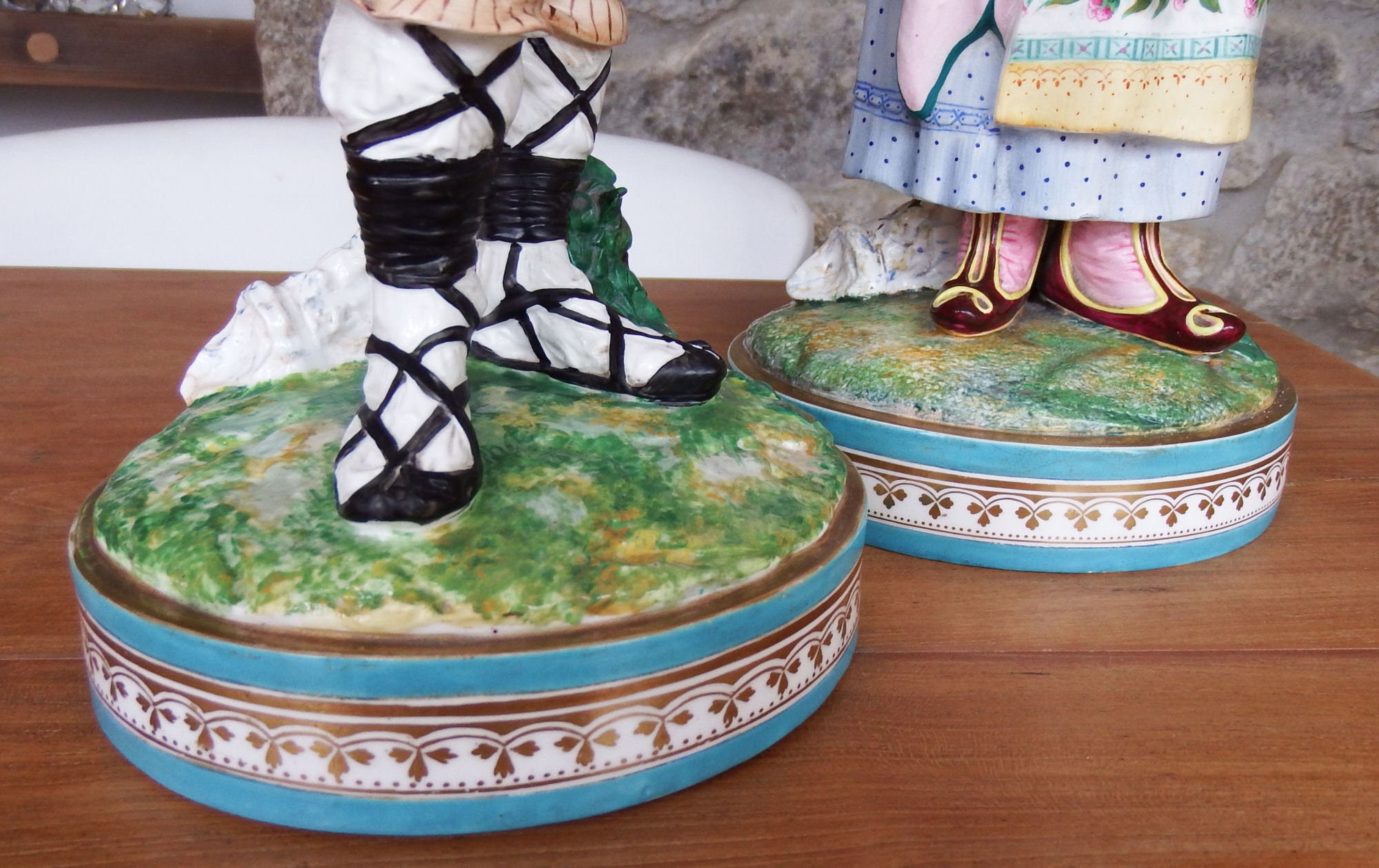 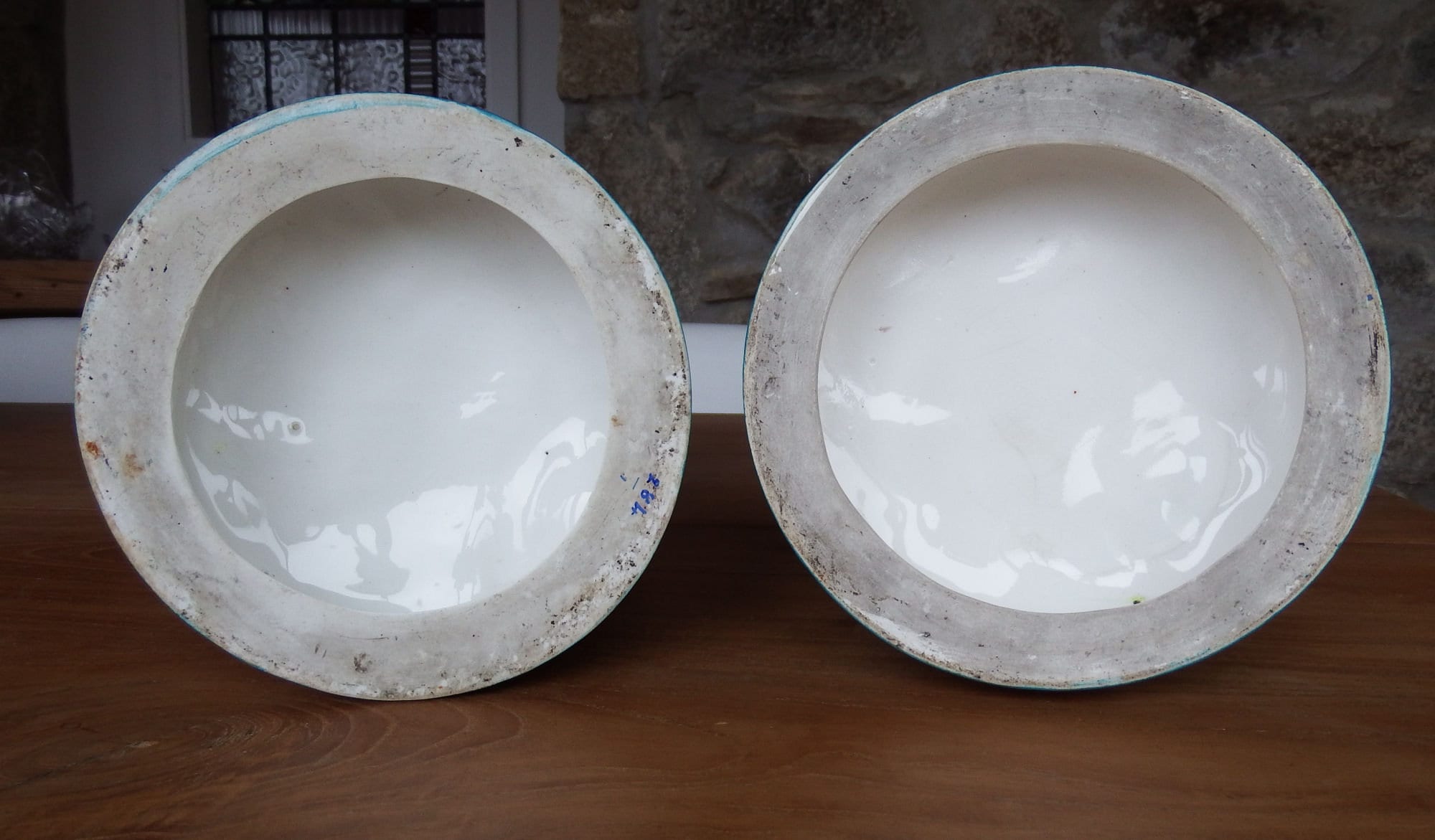 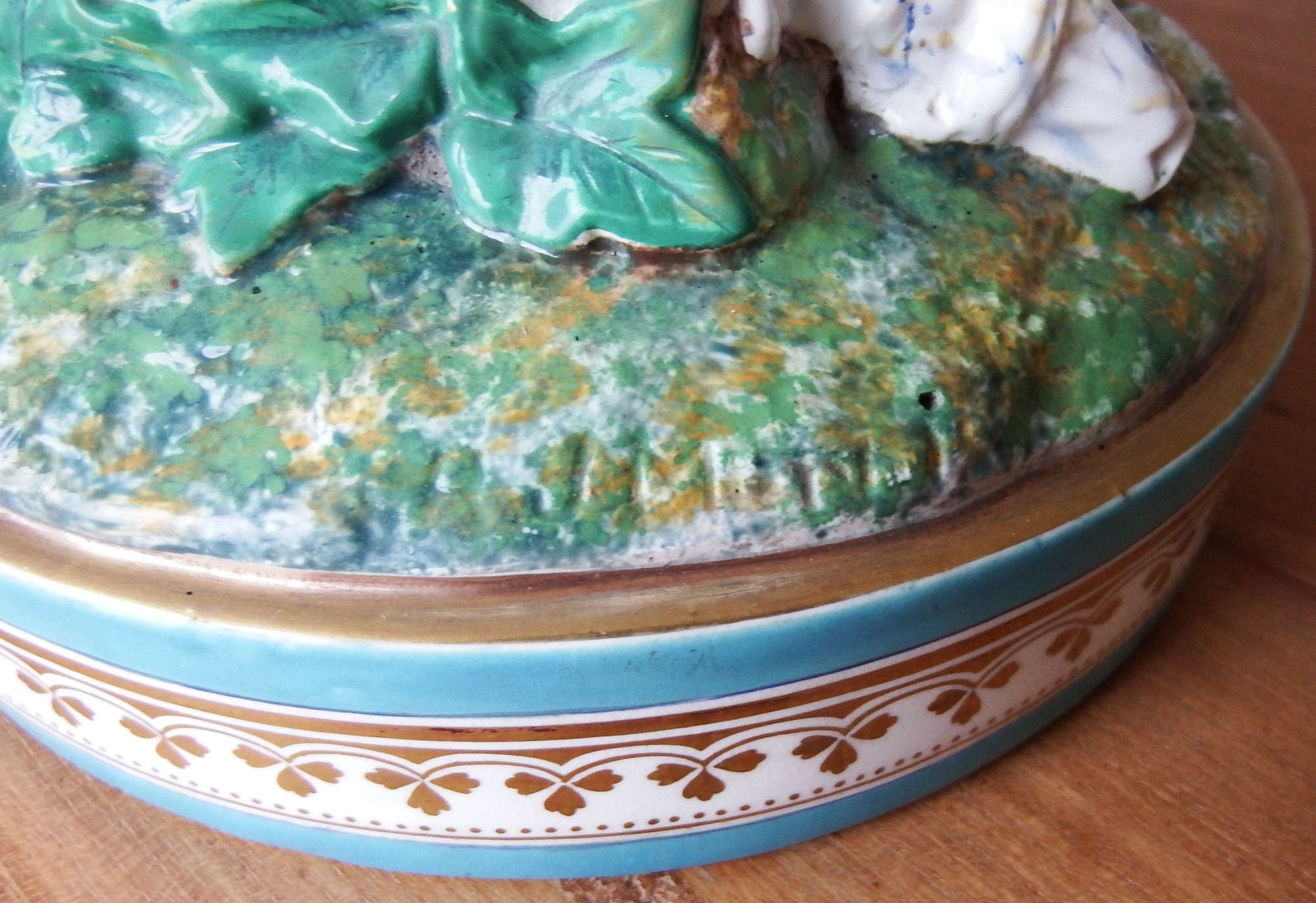 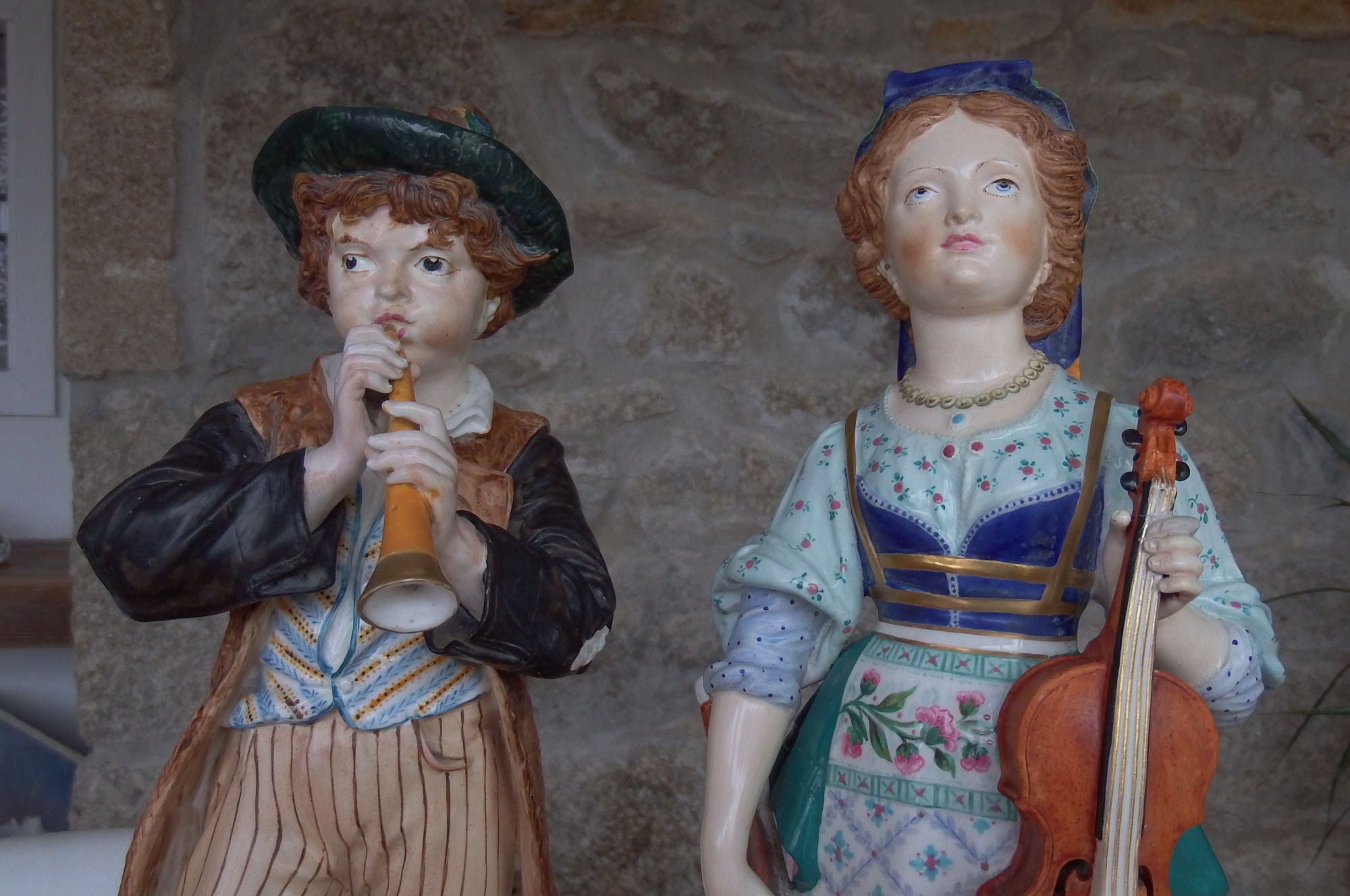 Each figure has incised signature R J Morris to the base. No makers marks, but most likely produced by Robinson & Leadbeater (who also produced these musicians in parianware). Rowland James Morris (1842-1898) was an extremely accomplished modeller/ sculptor working for Robinson & Leadbeater as chief designer. Morris was born in Staffordshire and is known to have worked as a modeller to more than one porcelain manufacturer (see below). His models were all sold to Shelley & Wileman in 1896.

Whilst this particular pair of musicians are known to have been produced in parian, this pair is superbly decorated id beautiful colour and detail, making them extremely rare.

Each is an impressive 39cm tall. Pristine condition although there has been a very minor restoration to the girl's finger and there is a small area of paint loss at the back of her green head dress.

These are large and heavy, so international postage will not be possible.

Country of birth and death: England

Born in Hanley, Staffordshire. He was the son of Charles Henry Morris (born c.1809 in Hanley) an engraver. Rowland was a student at Hanley School of Art and then at the South Kensington Art School (c.1863-5). Rowland Morris was the sculptor of the panels and statue for the Wedgwood Institute, Burslem 1865 to 1873. He was a modeller and then chief designer modeller for Robinson & Leadbeater in Stoke. Between 1885 and 1890 he worked for Moore Bros of St Mary’s Works (Bernard Moore), and for James Wilson of St Gregory’s Works. Around 1890 Morris became a freelance ceramics modeller, working for Shelley and Wileman.

Rowland Morris was the first known designer to be employed by Percy Shelley. He had been a pupil of the famous French sculptor, M. Hughes Protat, who was the modeling master at the Stoke and Hanley Schools of Art. Morris then gained a place at the National Art Training School in South Kensington. In 1870 he undertook some important work for the Wedgwood Institute, Burslem, where he modeled dainty white panels depicting the months of the year and a series of panels illustrating the process of potting. These are on the facade of the building and can still be seen today. After this he returned to various pottery firms designing china. An exact date when Morris started to work for Wileman is unknown, but in March 1896 one of his designs was entered into the design registry. The registered number 272101 was for the ‘Dainty’ shape which was to have a major impact for the company as this became the most popular design that the company was to produce. Morris was assisted by M. Maxime Avoine, another French modeller working in the U.K. pottery industry, in the task of creating the original moulds for the Dainty White range which was considered to amount to approximately 100 pieces.
Shipping Costs Policies